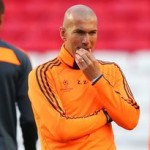 It has been reported that Real Madrid Castilla coach Zinedine Zidane feels France should select Thierry Henry one more time.

The Arsenal legend has announced his retirement after New York Red Bulls were knocked out of the MLS playoffs this week.

“For all that he has given French football, it would be a lovely moment for him,” said Zizou.

However, Zidane was the first to accept that France manager Didier Deschamps might have “a different point of view” about the idea of giving Henry one last game for his country.