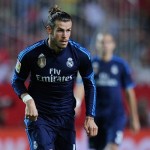 There’s talk of United already being in negotiations with Bale’s management team about a return to the Premier League.

United would be willing to put over €140 million on the table to convince Real president Florentino Perez to sell.

But Perez’s chief advisor, Zidane, stated: “Of course clubs will want Gareth Bale, he is one of the best in the world, but I’m not sure how we could be more clear than we have been.

“We sign the best players in the world, we do not sell them.” Neymar To Join Real Madrid At The End Of The Year