Reports have emerged claiming that Zinedine Zidane would have accepted the chance to replace Carlo Ancelotti as Real Madrid head coach had he been offered the job. 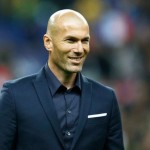 The World Cup winner with France, who was one of Ancelotti’s assistants as well as coaching Real Madrid’s reserve side Castilla last season, was among the candidates touted for the top job.

In the end it was Rafael Benitez who took over from the sacked Ancelotti, but Zidane has now revealed he would have made the step up himself given the chance.

He said in an interview with France Football: “Yes, I would have accepted being Ancelotti’s successor. I’m a professional and I’m never going to turn down a challenge.”

However, he is not downhearted to have been overlooked for the job by club president Florentino Perez.

He added: “No, not at all. I’m not disappointed. I believe it wasn’t the time.

“Things happen naturally, you don’t have to go looking for them. He (Perez) took the decision to choose another coach and that’s that.”