Reports are out claiming that PSG striker Zlatan Ibrahimovic has declared his confidence of victory against Champions League opponents Real Madrid. 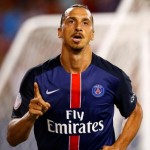 The Swede was typically bullish when asked about the game yesterday.

“We know what we have to do to beat the Madrid. It will be fun to play against them and we are ready,” said Ibra.

“I have not yet reached the top of my game, but I am convinced we can beat them.”

Ibrahimovic has only scored once in his career against Real – in 2009 for Barcelona.