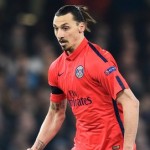 The French giants reached the quarterfinals after shocking Chelsea.

Ibra declared: “When we got Chelsea there were plenty that said it was a very tough draw too, but we knocked them out.