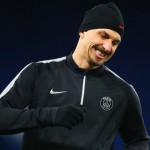 It has been reported that PSG striker Zlatan Ibrahimovic has copped a four match ban for insulting France.

Ibrahimovic has been banned for four matches after claiming France is a “s**t country” and complaining about the referee’s performance during Paris St Germain’s defeat to Bordeaux last month.

Ibrahimovic is already suspended for PSG’s Champions League quarter-final first leg against Barcelona next week after being sent off against Chelsea at the last-16 stage.