It has been reported that PSG striker Zlatan Ibrahimovic wants a move to Arsenal. 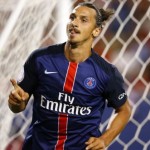 The People says that not only has contact with a number of our leading clubs been made on Ibrahimovic’s behalf but that the player himself has made it clear he wants to work with Arsene Wenger – and, what’s more, the Frenchman is interested.

Manchester United were also keen, but the Swede has – perhaps wisely – decided that a clash of personalities with dogmatic boss Louis Van Gaal could be on the cards.

The move will not take place in January – as the former Inter Milan striker, now 33, will run down his deal at PSG.

As the player would be arriving on a Bosman, Arsenal would have no problems putting together a financial package capable of enticing Ibrahimovic to join – and the added riches from the new television deal which kicks in next season would only increase their chances of landing one of the game’s superstars. Dennis Bergkamp One Of Arsenal’s Most Historic Signings – Arsene Wenger