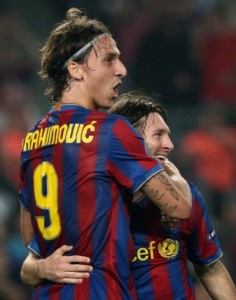 Barcelona striker Zlatan Ibrahimovic has admitted that he was relieved after his club defeated local rivals Almeria 1-0 yesterday.

The Swedish international striker said that it is always going to be difficult to play against a team with so many defenders and that Almeria was the toughest opponent Barcelona has facedso far.

Zlatan added that the players cannot do great in every game but is delighted that Barcelona got all three points.

On Pedro’s winner, Ibrahimovic said that it was a great goal and when Pedro plays for the team, he does well. Zlatan added that Pedro is technically very good and gives the team extra strength. .

Zltan also said that these are three very important points and now it is six consecutive victories for FC Barcelona. Messi : I Dedicate The Ballon d’Or To All My Teammates