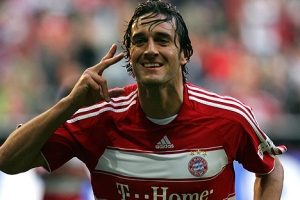 Interesting news are out and it has been reported that West Ham United boss Gianfranco Zola is battling former club Napoli for Bayern Munich striker Luca Toni.

Local British newspapers have reported that Zola wants to take the former Italian international hit man in the next transfer window, but now has major rivals in the Serie A side with Toni talking up the move.

Toni has been told he has little future with Bayern after an injury and loss of form left him out of the picture and now he is tempted by a return to his homeland.